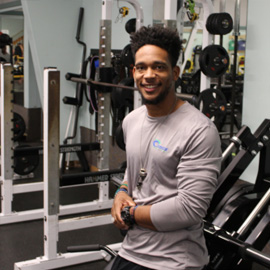 I’ve been around sports all my life, growing up I wrestled, ran track, played football, basketball, and also soccer. Then I attended Averett University where I played football for 4 years and graduated with a B.S. in physical education with a concentration in personal training. After graduation I stayed at Averett and became a part of the strength staff as an assistant strength coach and worked with all 17 NCAA ports, while also getting my USA weightlifting Certification while I was there. After my time at Averett I ended p traveling to Europe where I was able to play professional football for 2 seasons in Germany and also win 2 Championships. One of those seasons I was also a strength coach for some of the players on the team.