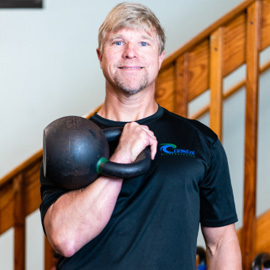 Gordon began his fitness journey in 1989 when he joined the Air Force to become a firefighter. Physical demands were high. While there was a weight room and a few cardio equipment pieces, no one truly knew about proper form, much less designing a real training program. Overuse injuries were commonplace. Left to his own devices, he read every available fitness book,  gaining a good foundation of knowledge.While stationed in Italy, he became an avid cyclist. Leaving the military for civilian life, he settled in South Carolina, where he continued his athletic endeavors in running, paddling, and mountain bike racing. On a day trip to Wilmington, he discovered surfing and knew this was the place for him! He moved here in 2004, obtained his coastal kayaking instructor certification through the American Canoe Association, and became a kayak surfing instructor and tour guide. In 2010, stand-up paddling piqued his interest. He took a lot of clinics and private lessons, leading to racing and SUP surfing, which he fell in love with! The quest for land-based cross-training led him to the kettlebell and into the gym. He continued his educational journey and became a Certified Personal Trainer and  Corrective Exercise Specialist through the National Academy of Sports Medicine. After years of training and practice, Gordon became a Russian Kettlebell Challenge certified instructor. Over the years, he has found that a person doesn’t need to train harder to succeed; they need to train smarter. As 50 is now upon him, Gordon has learned to prioritize smart programming. Whole-body and strategically placed, functionally functional movements win out over fancy exercises that look cool on a youtube video but serve little purpose in real-world activities. He goes by a motto: ‘A workout should give you more than it takes out of you.’ Less wasted time in the gym means more time for family and other hobbies. Today, he trains people of all abilities with a wide variety of goals, whether to lose a few pounds, find a life balance between work/family and health, or more lofty goals that require a more significant commitment.